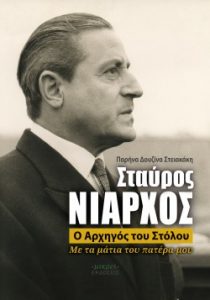 “STAVROS NIARCHOS  – COMMANDER OF THE FLEET – Through the eyes of my father” was published in Greek in 2017 by Mikres Ekdoseis. It was hailed as a best seller by the major booksellers in Greece and has gone into reprint. It has been translated into English and the quest for a publisher is under way.

STAVROS NIARCHOS was the brother in-law of ONASSIS and his biggest rival. Niarchos was a a fascinating, complex character with a life full of intrigue, glamour and salty sexual relationships. The book relates his rise to fame and riches revealing many previously unknown intimate details of the tycoon and the powerful people around him. Although the name Onassis is far better known, Niarchos is an integral part of the story since it was through their cut throat rivalry in everything that both men rose to the heights they did, creating the legend of the Golden Greeks.
Nicos Douzinas, the author’s father, was Niarchos’ Technical Director and right hand man for many years and in particular during the years of his spectacular rise to fortune, fame and glory.

My novel Faulty Genes was published by Xlibris and is currently available from www.xlibris.com. This is a satirical future fantasy of a world where the men of the species have been all but eliminated through a terrible epidemic of Orchitis. This has resulted in a a perfectly genetically engineered world. A totally regimented and regulated world where everything is planned and monitored. A world freed of war, pollution, overpopulation and most other ills. A world without men. But like all experiments in social engineering it does not quite turn out as it should, which becomes apparent when a spanner is thrown in the works in the shape of a female live wire. An impulsive exuberant girl whose “faulty genes” get her into trouble and she is banished in disgrace to the Farm where selected specimens of men are reared for procreation purposes only, on an out of the way island, which used to be Crete. This young uneducated girl plunges the whole world into utter turmoil through no conscious fault of her own, bringing us right back to where we all started from, only this time God turns out to be a woman and her motive compassion. 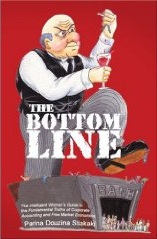 The Neo Liberal Free Market Economic dogma, of There Is No Alternative descended on the world in a toxic cloud, brooking as little dissent as Religious dogma during the Spanish inquisition. No one was allowed to think any more, still less question the received wisdom imparted from above, since we’d been plunged into an Orwellian world of newspeak where markets never fell but merely corrected themselves, where incomprehensible jargon was used to intimidated, fool and defraud the uninitiated, and all regulation, protection and social welfare were declared evil and scrapped by the devious bunch who wanted and did have it all their own way at our expense. Unfortunately this is not the plot of a science fiction novel but a description of what has been happening to us over the last twenty years or so. The book came out just as the Great Recession started crashing down and proved to be quite prophetic.

concerned with the daunting experience of emigrating to a foreign land has been published as an e-book on Kindle Amazon. It deals with a mail order bride from Greece, a distant, morose husband-to-be who treats her more like a functional fixture than a person, still less a woman, pitted against each other in conflict. Yet a raid by anti-immigrant racist punks becomes the catalyst that brings them together.

“Of light and darkness” 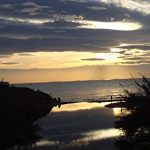 A collection of short stories including the mesmerizing even haunting For Ever More…
a vampire story set in northern Greece with a difference,

“Red Stains on a white cloth”

Over the years, I have had a number of short stories published in both Greek and English magazines as well as broadcast from BBC Radio 4. Along with some non fiction pieces ranging from how language develops to the place of poetry in Modern Greece. 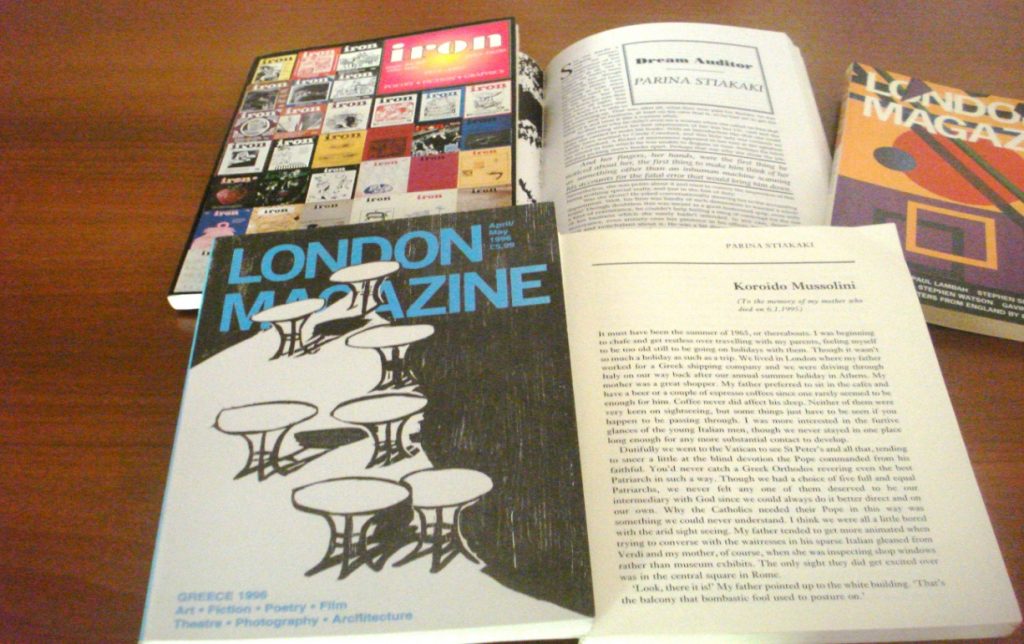 “Fickle Son of a Fickle Father” and “Slam Dunk”

Two novels in a series of quest thrillers whose principal character is Thalia, an archaeologist who has a theory that the ancient world was far more scientifically advanced than we now believe. In the first novel she begins her quest for the tomb of Demophon, aided by clues from Greek mythology and some Linear B inscriptions she discovers at Delphi. She finally finds her way to a small village in southern Crete in Greece, where her sister happens to be serving as the rural doctor. A series of curious events, including strange and inexplicable deaths, suggests to her that this is where she should dig. As the quest progresses, however, interest in it is also kindled in other quarters, ranging from professional antiquity smugglers to special anti terrorist services interested in the potential destructive power of her find. They all gravitate to Myrtos, the small village in southern Crete, where the Tomb will reveal its power and its secrets. Personal relationships get mixed up and entwined, leading to passion and pain, as the archaeologist’s sister falls blindly in love with the shady antiquities smuggler under the impression that he is an art historian. Throughout, things are not always quite what they seem to be, and in fact the quest for Demophon’s tomb is a quest for something very different, something even an American Physics Professor accompanying the archaeologist, is extremely interested in too.

Susan Buck-Morss (Professor of Government at Cornell University) has said of this novel:
“Excellently written… …and so gripping!”

In the second novel, “Slam Dunk”, Thalia is called upon to investigate a strange theft from the Holy Mount Athos. An apparently totally unrelated murder of a Nobel Prize in Economics winning academic occurs at the same time on an American campus reminiscent of the results of a Bacchanal frenzy. Her estranged father now suffering from a critical cardiac condition reveals the truth of what they had always believed were his Masonic pursuits and sends her on a mission to a friend on the US campus, where eventually the solution of the theft and the murder, related to the ancient Mysteries of Eleusis and the God Dionysus, a God that was resurrected every year in Greek mythology, comes to light.

“Fickle Son of a Fickle Father” is to be published soon

In the pipe line

The following novels are in line for publication:

A Flash in the Dark

Inspired by the Princess Diana phenomenon and the political and social upheavals taking place at the same time. The elderly Queen Deirdre of the Royal House of Murton has been reigning for over forty years  of significant historical changes and upheavals. Princess Cynthia herself never appears directly in the novel because she is an insubstantial icon and not a character in herself. Everything is played round her image. She is only seen and interpreted through third parties in the various circles concerned (or not so concerned) with her, and of course, on the screen. She remains an elusive two dimensional figure of no real substance, nothing in herself but everything in the projected and exploited image of her.

Beyond Black and White

Is a tale of obsession and conflict. Aliki, the daughter of a London Greek ship owner enters an illicit affair with her father’s chauffeur with whom she becomes sexually obsessed. Since she appears to have become very restless her parents decide to try and marry her off, but she manages to sabotage every attempt to do so until Minas Davaris, a self made business man from Greece arrives on the scene. She is affected by him, but instantly dislikes him, probably precisely because of that. In collusion with her parents he invites her to his island holiday home to spend the summer with his sister’s family and his mother. A battle of wills between them ensues, as a “love-hate” relationship develops during the course of which they become sexually involved. This results in their “having” to get married despite Aliki’s on going obsession with the chauffer, and the novel deals with the conflict between them, their explosive relationship rife with turbulence,  sexual and power politics both in bed and out of it owing to the clash of two powerful and stubborn egos.

Sex on a Flying Carpet

Is set in the period leading up to the first Gulf War in 1992, a satirical frolic dealing with the resilience of sexuality, female sexuality in particular, which is always the prime target of the various religions and has always been so.  It concerns the often farcical entanglement and intertwining of the lives and affairs of Fotine Tsakiris, the daughter of a wealthy  London based Greek ship owner, Lucy, the dim witted but kind hearted secretary of her father’s firm whom she “protects” and befriends, Ahmet, an Arab date merchant running into difficulties in the run up to the Gulf War and the embargo imposed, and Simon Goldberg an upwardly mobile bank officer, hotly pursuing Fotine. Of equal importance to the story are Spyro Tsakiris, Fotine’s father, divorced from her mother Kaliope and currently pursuing an affair with the snooty Clarissa Adams whose husband, Joel Adams, seduces Fotine on the Greek island of Patmos during an island cruise hosted by her father. Various triangular and rectangular situations of an erotic nature ensue. Of importance to the novel is the “Whore of Babylon” theme which runs through the book. The theme is central in that it draws together the various strands of: religious suppression and vilification of female sexuality, Eastern and Western attitudes (that is those of the geographical Orient and Occident), Greek islands and the curious effects they can have on people, the entangled politics and history of the Near and Middle East and the symbolism of Babylon, the confusing, thriving, muddled city of opulence. The novel ends with a slightly rueful epilogue over ten years later.

A wealthy businessman has received a threat to kidnap his daughter, Christie. He arranges for a special agent to spirit her away to a distant Greek island where they pose as a Professor with his young wife. Christies chafes and frets in this virtual imprisonment, not too convinced of the actual threat. The novel ends with an unexpected twist vindicating Christie’s deepest suspicions.