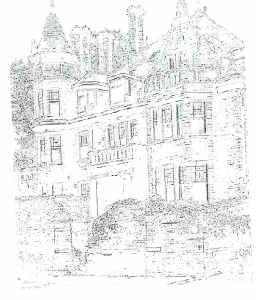 Once, many many years ago, two schoolboys, blazers, caps, ties and all, knocked on our front door and asked us eagerly whether our house was haunted and had we seen any ghosts. Ha ha! What tosh! We thought, only we failed to make up a story for them. We were only little school kids ourselves, at the time. Yes, it was that long ago. The house is still standing, I believe, or else hovering over West Heath Road in a chimera? and I dare say it is haunted now, even if it wasn?t then.

A grand piano. A very grand grand piano. A Bluthner. Authentic of course! Everything was authentic in those days or else it wasn?t. The sound of Chopin?s 9th Heroic Polonaise can still be discerned occasionally, in the middle of the night. Clear, crystal notes, not ringing out but chiming quietly in the dreams of the living. Of the current inhabitants.  The changing, different current inhabitants at any time. The beautiful Bluthner floated out of the house and away a very long time ago. There is no one alive now who has the remotest idea of where it went. But occasionally, on a clear spring night a shadow of a grand piano hovers over the house, the towers and then disappears suddenly.

The shadows appear through the flickering of the candle flames. Through clouds of cigarette smoke. Against the walls of the drawing room. Where the grand piano once stood proudly. The sound of laughter resonates eerily in the night. Joyous laughter of times long past tinkling quietly in the dark. A vivacious hostess welcoming her friends. A party. Music and dancing and more laughter. The drawing room fills with well dressed people. Light the candles! Light the candles to absorb the cigarette smoke threatening to fog up the room and there is fog outside so the windows being opened will not help!

By morning all signs of any party have disappeared. No music can be heard. Chopin?s Polonaise has wafted away into the stratosphere. A chink of milk bottles being left outside the front door. Or is that an indelible feature of times long gone as well? Those who were are no more. All gone. Flying off into the red night sky that glowed over Hampstead Heath. Yet the shadows remain. Long shadows in the night. A smile, a twinkle in a long gone eye. A puff of smoke. Tears and longings. Long forgotten. But in the dark of the night the house throbs. Imperceptibly perhaps. But it throbs. The shadows flicker on the walls when lightening strikes. A sudden flash and then the thunder. No one really notices, only the very discerning or the very highly strung.

Ghosts? What tosh! They don?t exist! Well no. Of course they don?t exist. By definition, if someone is dead s/he no longer exists. Nevertheless? the aura remains. The intensity of emotions, the mark one made. The intensity of joy, the laughter that filled the rooms, the music. The very walls are imbued with all this. And sometimes the current inhabitants are touched by a weird, inexplicable sense of something in the air.

The drawing room is no longer as grand as in times gone by. There is no piano to be played. There is no smoke and no candles left. Sometimes, even if only very vaguely, one can discern the form of a proud elderly lady[1] sitting in the entrance hall, enjoying a cup of coffee, with hot buttered toast, quietly smoking. There was a lot of smoke everywhere, Both inside and out.

On New Year?s Eve, if one listens very carefully with all antennae alert, one can almost hear Auld Lang Syne being sung by voices as the piano chimes out the tune. Should auld acquaintance be forgot?.  Till it becomes inaudible, as all those who sang it together are no longer there or anywhere any more. So many, says the poet, I had not thought death had undone so many?[2]

And yet. Their shadows still flicker on the walls, in the night, suddenly illuminated in a clap of thunder. Only in a brief flash. But the memory lingers on. As they also sang at the height of the party.

Kifissia (a long way from what was home, both in miles and time)

[1] Elli Lambrides, the formidable Greek Teacher in whose papers this sketch was found.